Regarding certain condemnations of Donald Trump

At this point, it makes more sense to answer these things with gimmicks like this. 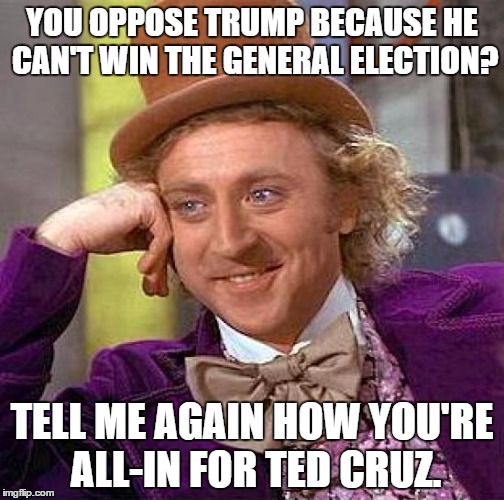 A decent analysis of Trump

By Tucker Carlson of all people.
Posted by Crude at 8:12 PM 5 comments:

Most of my reactions to philosophical treatises on grand moral projects come in two flavors.

Person A: I think on the whole it's moral to do X, and we should all strive to make sure X obtains through ways A, B and C. I believe this owing to either God or philosophy which ultimately indicates a theistic world or a world of intrinsic purposes with lasting consequences.

Me: Interesting. Tell me why you think that. What premises, what revelation, are in play here? I will try to evaluate how much credence I put in all of these, where I agree and disagree, and we can continue accordingly.

Person B: I think on the whole it's moral to do X, and we should all strive to make sure X obtains through ways A, B and C. I reject the existence of God and think the entire universe is a purposeless machine, but if we assume certain ethical stances we...

Me: Are there a lot of people who believe you who have guns and a willingness to use them?

Person B: But, utilitarian ethics according to Singer would indicate...

Do I Trust Trump?

Legion of Logic made an entirely fair comment about Trump's candidacy:


I enjoy how Trump makes progressives have meltdowns, but beyond that I can't find any reason to trust him. The only track record of his that I have found is that Trump will do and say what he needs to in order to get what he wants, and that isn't exactly comforting.

So when I say that I support Trump, does that mean I trust him? That I think he's someone who will follow through with all of his promises? When he rolls out his policy statements, do I think he's showing me - top to bottom - what he really thinks about every issue?

I'd regard those as fair questions, for which I have a straightforward reply: "No."

I keep emphasizing that I am gambling on Trump. He is a choice with risks and potential payoffs - I consider, on balance, these risks and payoffs to be the best with a Trump presidency. I don't have to believe Trump is completely or even mostly sincere for him to be worth a bet. He just has to be the best choice of all my reasonable alternatives, and he is.

To understand why, first you have to look at the alternatives.

'This is a person who is saying what they need to in order to get what they want' describes every candidate in play right now. People like to point at Cruz as the guy with the conservative bona fides, but A) Cruz got elected in one of the most right-wing areas of the country. Being an outspoken conservative maps heavily to 'saying what he needs to in order to get what he wants.' and B) Cruz has already tried to pull off tricks that I regard as confidence shaking, and which I've pointed at before.

When Cruz has an 11th-hour conversion on TPP, coincidentally right as they have enough votes and his vote is no longer needed, what - I'm supposed to believe the sincerity of his condemnation? When Cruz's history on illegal immigration is 'The reason we have so much is that there's not enough LEGAL immigration! Let's massively increase that, especially H1B visas!', should I believe him?

This doesn't mean Cruz is a candidate that I could never support. I'm pointing out that he is a candidate with risks of his own, and a track record that suggests that yes, he says what he needs in order to win. Fine - that's just the way it is. The same obtains, generally to worse degrees, with every candidate running who has a prayer.

However, let's say you back me to the wall and ask me about trust. Which candidate can I trust the most, overall gambles aside?

Once again, fair question, with an easy answer: Trump.

See, there's one thing that Trump has over each and every one of the other candidates when it comes to trust. One thing that actually makes it so, if I'm supposed to go with the most trustworthy candidate, Trump becomes the natural pick.

When Trump initially pointed out that illegal immigrants are not all sweet and beneficial people, and in fact we get a whole lot of criminals, drug dealers, and problematic people who are basically going to be a net drag on our resources (even if there are some good people as well), Trump suffered. He was criticized from every quarter, including his own party. There were demands for him to step down. Business contracts he had were cancelled, and he was risking becoming a pariah in the business world - he was not just losing business, but people were trying hard to hurt his businesses.

He did not back down. He said, explicitly, that he said nothing wrong, and that he'd deal with those business threats on his own terms.

Credit where it's due: Trump's reaction is not common. In fact, it was anomalous in the extreme. To stand up and refuse to apologize - to explicitly stand by your comments and angrily yell that you've said nothing that was untrue - is near unheard of. Even individuals who refuse to back down are inevitably, and quickly, chastened to the point of going into near-hiding. To not just stick it out but go on the offensive immediately, and to do so with grace besides? It simply doesn't happen.

With that in mind: name the candidate who I could have a hope to stand and fight, ferociously, if the media and the business world turned on them in a sustained, frenzied attack.

Now, add to this the fact that every issue I care about - every issue I'd like to advance on or hold ground on - is an issue that is likely to trigger such a reaction.

Ask me to vote for the candidate I can trust the most, and I'm left with Trump again.
Posted by Crude at 10:16 AM 6 comments:

Been busy lately, so a few updates.

* I see Donald Trump continues to dominate the GOP polls. He seems to have ruthlessly deflated Ted Cruz's opposition to him, and if the Reuters rolling 5-day is anything to go by, Cruz is fading fast. If Trump ends up so much as winning the nomination, it's going to be a riot.

* I admit, I liked Cruz in a way, but I was never able to forget his multiple too-clever-by-half moments: Supporting TPP until the moment his vote was no longer needed to pass it. Stating his opposition to illegal immigration on the grounds that what was -really- need was a massive increase in legal immigration. Etc, etc. If I have to gamble - and I do - then I'm gambling on Trump.

* Meanwhile I see NRO is throwing down and doing all they can to try and stop Trump from winning the nomination. My prediction: it won't change a thing. Trump will win Iowa and New Hampshire, and probably the nomination itself. Funniest moment so far: the stern-faced statements about how Trump's nomination will mark the first time since Goldwater that conservatism has been sacrificed in a GOP presidential candidate, followed by shocked confusion when everyone responds by laughing.

* In 'local' news, I checked Ed Feser's latest post (his dissing of Coyne) only to find im-skeptical showing up to argue. This was promptly followed by dozens upon dozens of posts by people alternately laughing at him and tearing him to shreds. Last I saw he got Brandon of Siris' attention, who proceeded to demonstrate clinically, thoroughly and at length what I tend to just point out in a paragraph: Skep is an idiot and is so lacking in self-awareness that he qualifies as a chinese room. Wisely, Ed stopped taking him seriously pretty fast, so it remains to be seen how long he's willing to put up with essentially being called a retard by regulars. Feser's blog is filled with sharply intelligent sorts, but they're not nearly as 'fatally polite' as the esteemed Victor Reppert - they'll laugh in his face, as will Ed.

* Back to politics, I see Hillary Clinton is petrified at the prospect of Bernie Sanders making her nomination as 'inevitable' in 2016 as it was in 2008. Clinton's burdened by a host of problems - she's thoroughly unlikable, has a terrible track record as a politician, and her long history of attacking self-described 'rape/sexual assault survivors' is re-emerging at quite possibly the worst possible time in history. My prediction: if Hillary loses, look for Bill to unceremoniously divorce her on the spot. She will have outlived her usefulness, and that usefulness is the only reason she's still around.

* I wanted to like Bernie Sanders. Early on I heard that he had a more neutral attitude towards religion as opposed to Clinton's convenient 'It's time to change religion to match our new standards!' harshness. I heard he was a nationalist, opposed to illegal immigration because of the damage it causes American workers. Unfortunately it's become clear that he's a humongous SJW wimp, whose election would only be positive in a 'Wow, the disaster this will result in will be almost worth it for the entertainment value' way. His nomination, however, would be great just to see how Trump handles him.
Posted by Crude at 5:21 PM 5 comments: