See, the right-wing was told by the GOPe: you guys have to start compromising. You can't win on every platform you want to win on - something's going to have to give. So start compromising, start giving up on this or that issue for the sake of political success.

Which is exactly what Trump's supporters by and large did.

The wrench in the plan was that the expectation was the grassroots right would give up on issues the GOPe wanted them to give up on. Give up on abortion and immigration, and in exchange we'll be able to better advance free trade and foreign wars. The very idea that, given the choice, plenty on the right would gladly sacrifice foreign wars and free trade? That was unthinkable. After all, don't the people revere good ol' George W. Bush?

Didn't they stop to think that maybe a lot of us were *already* compromising by siding with them to begin with? That unlimited free trade and endless foreign wars didn't animate us, but were instead the things we were willing to put up with to achieve our other goals?

This is what compromise looks like, #NeverTrump. Thank you for your winning advice.
Posted by Crude at 9:52 AM 11 comments: 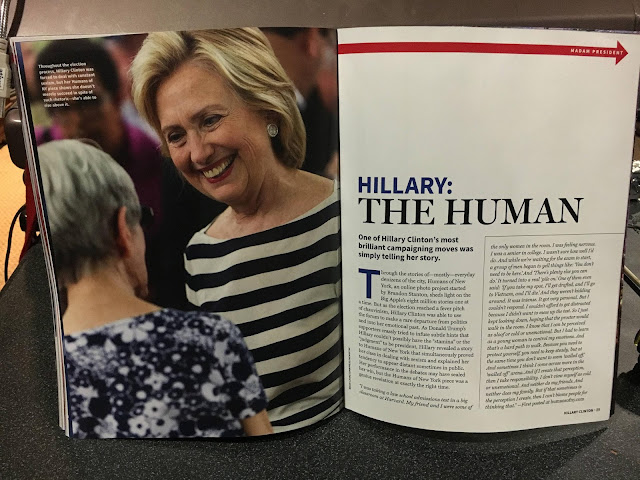 Seriously though, check out the scans of this thing if you can. I love the bit about how Trump's supporters were so desperate to defeat her that they called for the 19th amendment to be repealed.

How sad is it when the mainstream media spends an entire election destroying their own credibility in order to help elect someone who isn't even competent enough to get elected?

What's Wrong With The World eats crow, manages to sneer the whole time

To the surprise of no one, of course.

Sage McLaughlin, which I assume is not a real name (and I refuse to believe otherwise), apparently drew the short straw among staff, so it fell to him to do the crow-munching. Not content with being completely wrong about the outcome of the primaries,  the election, or the control of the house and senate, Sage decided to chart bold new territory and be completely wrong about his analysis of WHY he was wrong.


There was something else, though, something that stood a chance of making the 2016 campaign into a black swan event, though I had dismissed it with scorn from the very start: the craving for attention on the part of Trump’s voters (and, decisively, his potential voters). That craving found indirect reflection in the unbalanced, narcissistic personality of the Republican candidate. Moreover, their acute sense of victimhood made them amenable to any appeal that seemed to be directed at them. It was an appeal that Team Clinton consciously decided it had no need to make, bound as they were by their stubborn conviction that the Obama coalition could be mobilized without Obama’s name on the ballot (something for which none of the last five election cycles has provided any evidence).

What part of the electorate would this be? Who did Clinton ignore, to her detriment? Between her "this is how Hillary is like your abuela" and hot sauce comments, she hit every victim class we're used to hearing about. Well, everyone we'd normally call a victim class, anyway.

He takes a while to come right out and say who he means - these people who need attention, these people who feel ignored, these *snort* would be victims. But it shouldn't be hard to figure out the object of his contempt in advance.

No, not all white people of course. Just, you know - the lower classes. Those who are not college educated and who wouldn't appreciate the bon mots of Sage and company, in part because a bon mot sounds like a shitty, expensive, French candy. Largely non-college-educated white people, the kind who live in communities that the people at What's Wrong With the World think have a moral obligation to die a la Kevin D. Williamson. People who, if they would be so kind, should just die already because their nasty sense of entitlement provokes them to do things like protest illegal (and massive legal) immigration. To think they imagine their wages shouldn't be intentionally deflated, or their communities overrun with people from another culture or the like.

Bastards! And yet, I find myself sympathizing with them.

Of course, I also sympathize with the blacks and hispanics - those who have actually been here legally, who have assimilated - and who also are quite screwed by these influxes, yet whose self-appointed leadership have been able to pacify the dregs with distractions. What can I say - I think American laws should, first and foremost, help Americans and American communities.

WWWtW thinks differently, which leads to a bit of a lesson. While Sage complains with a sneer about how a certain class of the electorate was too whiny - 'white niggers' he may as well call them - the real reason that's a problem is because Sage and company feel awfully ignored over there. Why, they are conservatives. They teach! Their friends write for the glossiest right-wing toilet paper around, National Review. How dare the plebes pick a candidate to represent them to the detriment of those who pray at the most important altar of all - the altar of free market economics and neo-con overseas projects!

And so, Sage - and Lydia, and Tony, and Paul, and all the rest - continue to sneer and forecast doom and gloom for we Trump supporters. Sure, they've fouled up every prediction so far, but - as Malcolm has noted in the comments - they're ready for what's coming. Every failure will be blamed on Trump. Every victory, called an accident, with praise heaped on Trump's accidental cabinet picks. Forget for a moment that Trump has already done one hell of a lot more than previous Loser-in-chief George W. Bush ever accomplished (aside from his SCOTUS picks, the best of which was forced on him by a furious base, aka, the predecessors to Team Trump.) Forget that he slayed the Clinton machine, helped save the GOP's position in the house and senate, and a whole lot more. No, Trump will screw up someday, and they'll finally be there to say 'I told you so'.

No doubt, I say to the folks at WWWtW. You will, no doubt, someday be able to say 'I told you so'.

Cheap Shot at What's Wrong With the World

It's ironic that their most recent post was about the importance of the First Amendment, served literally hours before God rendered 'em speechless.
Posted by Crude at 10:37 PM 10 comments:

A Tale of Two Crudes

This is an opportunity for a lesson about Christianity.

See, in the past few weeks, I've had a few folks dropping comments on my blog. I don't even know these guys, but apparently my ardent Trump support pissed some people off, so whenever Trump had a scandal (he said a bad word!) or was down in the polls... rarely, but at times, someone would pop up snark at me.

I just spammed 'em at the time. But to them, two sincere responses.

Greetings, hostile person. On this, the day of Trump's victory, I have a message for you.

Look. My support of Trump is because I think he will do some good things. At least, he has a chance at doing so, and he will inspire some people to do some good things as well. Believe it or not, for all my criticisms of black culture and community - I want black people to succeed and thrive. The same for hispanics. And asians. And whites. I want nothing but the best for people, and for the people who disagree with me about what 'the best' always is? I'm actually largely in favor of leaving them alone in a legal sense; I just demand the ability for people in my culture, in my world, to live their lives in their communities as they see best, building a future for their children. I put America First, but not America Only, and I look to Trump to have an attitude similar to that.

So, that snark and lashing out? It's forgiven. Because it's minor, and I think it's born out of a frustration and a lack of understanding of what I am - indeed, what many people like me are, and what we want.

After you really accept these election results, I hope and pray you pause and ask yourself if maybe hostility isn't necessary. We can get along and leave each other alone, and otherwise be united in peace.

Greetings, hostile person. On this, the day of Trump's victory, I have a message for you.

How's it feel, choking on your own cock? Ha ha ha.

Decide, with those responses in mind, which you'd prefer, and more than that - whether you should encourage the Christian side or the non-Christian side that exists in people.
Posted by Crude at 1:00 AM 4 comments:

I've got a golden ticket...

This has been a glorious election. In a way, I wish it could continue for a couple more years! Trump has managed to scare the everloving hell out of people, forcing media bias to become utterly obvious to everyone in a blatant attempt to change the election outcome. (Gotta love the way Trump's rallies are so large, filled with people who openly despise CNN and the MSM in general.) The corruption by the government was on center stage, with the FBI blatantly declining to prosecute the clearly criminal Clinton out of fear and toadyism. Wikileaks has shown the Democrats to be beholden to Wall Street, corrupt beyond belief, and the amount of election rigging that has gone on has been absolutely priceless.

This is a genie that won't go back in the bottle.

Let's say Hillary wins tomorrow. There will be lamentations - well deserved! - but she'll hobble into office as a crippled candidate - morally, politically, and given her penchant for passing out like a drug-addled senior citizen, likely medically as well. Trump delivered exactly what he promised during the primaries - a savaging - and that alone makes him the most honest candidate we've seen since Reagan. What has been necessary to shove Hillary within grasping distance of the finish line has been amazing; tell me that Jeb! or Rubio would have done better, and I will have one hell of a laugh.

The electoral process - the government, the media, even the corporations - have all been exposed as corrupt and tainted. The only possible way to vindicate it, if only for a moment, would be for Trump to actually win tomorrow. Which means, if in drastically different ways, this entire process has turned into a win-win one for those with my sympathies.

Of course, time's going to march on no matter what. But Leviathan itself took a savaging this election, and the wounds aren't going to close quickly. Granted, that doesn't mean happy times are right around the corner - wounded beasts are dangerous. But after watching the GOP, along with conservatives, squirm and wiggle and whine and cry for so long, and so pathetically? I've come to enjoy a bit of fire and ferocity. I enjoy the fact that now, more than ever, it's easier to see who's on what side.