Liberal Christians will side with militant left-wing atheists over conservative Christians, every time.

One thing that made New Atheism 'new' was precisely its redrawing of the lines to treat even liberal Christians with scorn, despite them previously being seen as ultimately on the same side as atheists.

One reason my concern for respect for left-wing Christians died was repeatedly seeing this play out, from organizational leaders to the lowliest combox commenters.

What the hell is going on with Ted Cruz? 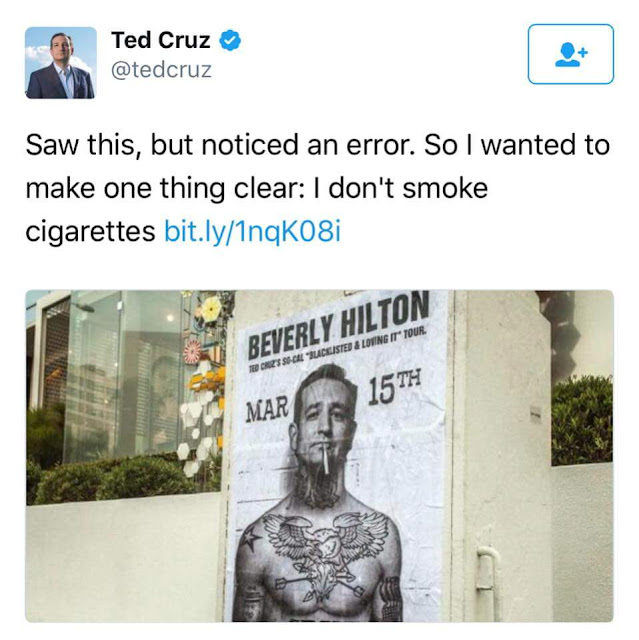 Between this, his Sanders slaughter and his recent media trolling, I have no idea what the hell is going on. But it's pretty great.
Posted by Crude at 6:44 AM 3 comments:

The Gelding of What's Wrong With the World + Other Thoughts

I've been a little busy, so a few comments.

* I see Ed Feser's blog is as great as ever. Just a constant drip of great ideas, explained in ways most people can grasp, and with proper charisma and force behind them. I salute him and all that he does, and I remain intellectually in his debt, likely for the rest of my life.

* What's Wrong With the World, on the other hand, hasn't fared nearly as well. Being frank, they've been gelded, or in the case of their female author, sent to the kitchen. After an entire election of Nevertrump virtue signaling and effective endorsement of Hillary Clinton as the lesser of two evils, they've not only been exposed as dead wrong about a variety of things (SCOTUS nominations included), but they've been reduced to near-silence on political issues across the spectrum. Too proud to admit they were wrong, to say nothing of defeat, all they really have left is taking pot-shots at the alt-right - ineffectively, no less, which is saying something.

I suspect that for them, and for many Christians, if Trump manages to appoint multiple pro-life justices and get Roe v Wade overturned, their first reaction will be to scream in outrage. The very idea that they were wrong is not something they will cop to, or perhaps even contemplate. Ah well.

* Meanwhile, looking over at Dangerous Ideas, my heart aches. Over the years, I've found myself moving in a position from 'Left and Right can put aside their differences in the Church and unite' to 'Actually *some* leftists poison the Church, and we have no common ground to work with'. Little by little, the list expanded. From 'John Shelby Spong sorts' to 'Overt pro-gay Christians cheering at fellow Christians being fined into oblivion by the state' to more to... basically, no one left on the list but Victor Reppert. To glance over and see Victor talking impeachment (and way out of date - that russian conspiracy shit died a while ago in the public mind) just breaks my heart. There are ways to have common ground among disagreeing parties in the Church, but more and more I'm convinced that said 'common ground' doesn't extend across left and right. Ah well.

* Trump, meanwhile, continues to amaze and dazzle, and with luck I'll be dazzled for 8 years. Managed to rather quickly make secessionists and 2nd amendment users out of a number of leftists too - to say nothing of clearly making 'the law of the land' a very optional thing to respect. Keep it up, gents. At this rate, we'll be a United States no more... and I can't say I'd mind a change.

* Last but not least, the transformation of 'Love Trumps Hate' to leftists punching people, rioting, and setting fires when someone so much as tries to give a speech they disagree with, is some grimly amusing shit. That said, it's time to end it - I think defunding any public university with speech codes is a good start. Another good one: when antifas get violent, the police handle them with batons, tasers, and rubber bullets. To the eyes. Also, prison time.

* Bonus Pope Francis commentary: God, save us from this menace. Also, being dead honest: grown men who call the pope 'Papa!' in terms of child-like endearment will never stop coming across to me as the most cringe-inducing faggots. He's not your dad, and you're not his infant, you weirdos.