The problem for Pope Francis, post-Trump, is that the president inadvertently spilled an awful lot of bluntness and honesty into our water supply, and a lot of people have been drinking pretty heavily from it. So when the Pope goes about openly trying to cut connection with traditional church teaching - indirect and roundabout, lest he go too far and provoke the Holy Spirit to throw him off a balcony courtesy of a zealous underling - there's far less of an urge to excuse the whole thing.

"It's the media! The media isn't reporting him accurately! They want us to believe he's a heretic!"

"It's not HIM. It's his advisers! Ohhh, that Kasper. That Marx!"

Yeah, I know the feeling, I understand the motions people feel they need to go through. And I know the sigh of relief many - and I mean many - otherwise traditionalist-leaning Catholics will feel when he finally kicks it. "Oh, he's dead? Requiem in terra pax, and FUCK him." is going to echo off quite a few walls when the time comes and the burden of loyalty is lifted from them with regards to this particular blight.

But for many of us, the blessing of this new moment of sincerity in communication ('toxicity' as it's called in the mainstream) makes it hard for us not to say what we damn well think. And I suspect many a Catholic, and a cleric, bemoan this state of affairs. Life was easier when cuckservatism was the name of the game, and a demanding left could be pacified by sacrifices from the timid right.

But when both left and right growl and throw punches, what's a coward to do?
Posted by Crude at 8:29 PM 4 comments:

Found this on Imgur.

What I love is that someone obviously added that text at the top, having absolutely no idea about the context of the original pic/edit. 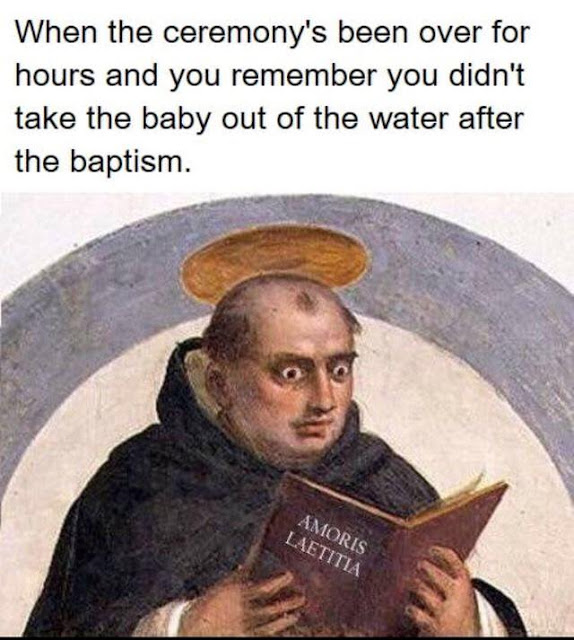 I side heavily with the traditionalists in the Catholic Church. On sexuality, on the death penalty, on all the nasty, controversial, modern conflicts of Catholic moral teaching, I'm orthodox. Even on the touchier subjects, like evolution and creation, my sympathy with traditional teachings (and modern views which heavily incorporate traditional teach) is express.

But I don't include nobility-LARPing among that.

I'm talking about the tendency to describe cardinals and bishops as "Princes of the Church", and all that implies. Or the stern lecturing I sometimes get from Catholics who tell me that the Pope is "your sovereign" and my very soul depends on my treating him with the utmost respect, the most scrupulous of personal loyalty. That, while I am perhaps not duty-bound to follow his political views, and I can resist any de facto immoral commands from him, I nevertheless must treat him with great respect and love at all times, never questioning his intentions, and never standing in judgment of him.

My response is simple: yeah, I'm not doing that.

Francis is a terrible Pope. His advisers are terrible people. That recently-dismissed US priest had him dead to rights when he talked about how the main accomplishment of Francis was making all the rotten-hearted turncoat clergy (I'd add, "And Catholic bloggers") in the Church reveal themselves and thus raising the possibility that a future Pope may kick them all out. Which, I surmise, he could probably do just by ordering that health plans and hospitals for the Catholic clergy no longer cover HIV-related illnesses.

Yes, I'm suggesting a lot of them are not just gay, but sexually active heretics besides.

Again, I know the some people - some good people! - would be horrified by this. I'd be condemned as a liberal (or a protestant!) for having this attitude, which is funny since the Pope seems to have a rather celebratory attitude towards both of those things. Pardon, but I disagree. I'd go so far as to say, I think otherwise good people do harm to the Church by promoting it.

And so long as I'm letting that out, I may as well say: my opinion of many Catholic bloggers isn't much better. I value Feser and Mike Flynn and various others. But I think Mark Shea and Simcha are pretty awful, and would do everyone a service if they gave up blogging altogether and found another hobby. (For Simcha, I recommend something other than cooking. For Shea, something other than eating.) The combination of sanctimonious political rage and mediocrity is downright Loftusian, with the success to match.

It doesn't get much better when I read the Anchoress or, the house-trained pet of the New York Times, Douthat.

I bring all this up just to make it clear where I stand on these things. I came to peace long ago with the idea that the truth of the Church is compatible with the existence of an absolutely rotten Pope (and thus, certainly Cardinals.) Well, we've got one.

I always wondered what it would be like to experience that!
Posted by Crude at 8:57 PM 2 comments: